Upcoming plays, more information can be found on www.mariemontplayers.com/current-season

A comedy by Ed Howard, Joe Sears and Jaston Williams

Tuna Does Vegas re-unites the lovable and eccentric characters from the “third smallest town in Texas” as they take a rambling romp in Sin City. The hilarity begins when oddball-conservative radio host Arles Struvie announces on air that he and his wife Bertha Bumiller are heading to Vegas to renew their wedding vows…but everyone in Tuna, Texas goes along for the ride! Danny Davies and Wayne Wright return as all of your favorite characters from the award-winning Greater Tuna productions, plus some new characters too!

Here is the Mariemont Players website for more information 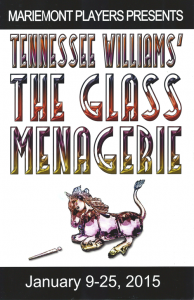 A drama by Tennessee Williams

In Tennessee Williams’ shattering classic, an aging Southern Belle longs for her youth and dreams of a better life for her children. Her restless son Tom – a would-be poet and the story’s narrator – gets swept up in his mother’s funny and heartbreaking schemes to find his painfully shy sister, Laura, a husband. The Glass Menagerie is considered to be one of the most beautiful dramas in American theatre.

A traveling repertory troupe comes to a small village in Ireland and after a week or so of Ibsen, Chekhov, and Strindberg, the town is driven mad. Is Life Worth Living? is a gloriously goofy satire that imagines the undesirable effects a steady diet of serious drama might have on the amiable residents of the provincial seaside town of Inish. Lennox Robinson’s pointed and charming comedy was originally produced in 1933 and successfully revived in 2009 by New York’s Mint Theatre company. 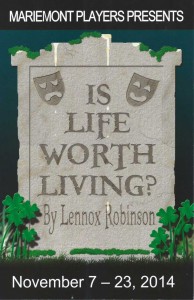 by Rich · Comments (0)
Mariemont Players Announces Auditions For
Taking My Turn
Director Dennis Murphy will hold auditions for the Mariemont Players production of Taking My Turn, the award-winning, critically acclaimed musical about people “in their prime” performed by people “in their prime” at 7:00pm on Monday, June 2nd and Tuesday, June 3rd at the Walton Creek Theater, 4101 Walton Creek Road (just east of Mariemont). Taking My Turn has music by Gary Williams, lyrics by Will Holt and book by Robert H. Livingston. This production is being produced by Michael Sauer and NancyAnn Storey, with musical direction by John Nixon.
Those auditioning are asked to bring a resume and photo and to prepare two 16-bar contrasting songs from pre-70s Broadway, Cole Porter, Gershwin or the like. Their will also be readings from the script.
The show calls for 8 performers, 4 male and 4 female, who are 50 years and older. One male and one female are African-American. This is a wonderful opportunity for veteran performers to shine onstage!
The score for Taking My Turn includes songs from a variety of inspirations: Broadway, classical, waltzes, ballads, jazz and gospel. The spoken words represent stories, poems, remembrances, reflections and even complaints collected from interviews with everyday senior citizens. The result is fresh, a little feisty, full of poignancy and of humor.Taking My Turn was the winner of the 1984 Outer Critic’s Circle Award for Best Lyrics/Music and a nominee for the Drama Desk Award for Best Musical. The original production which starred Cissy Houston, Margaret Whiting, Marni Nixon and others was filmed by PBS and shown on “Great Performances.”
Rehearsals for this production will begin in late July, with performances September 12 through September 28, 2014.
For more information, contact the director at 513-921-2909.
Comments (0)
Categories : Mariemont at Large
Tags : Mariemont Players, Taking My Turn 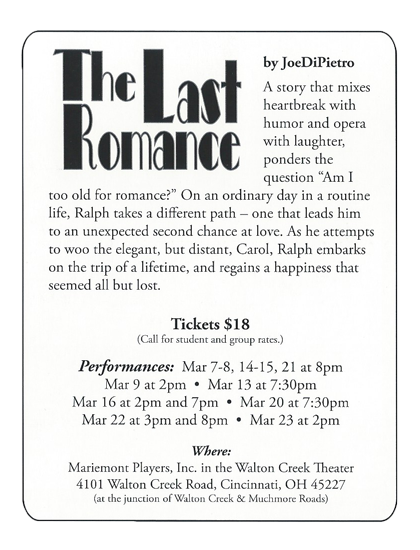 Mariemont Players Presents-Barefoot in the Park 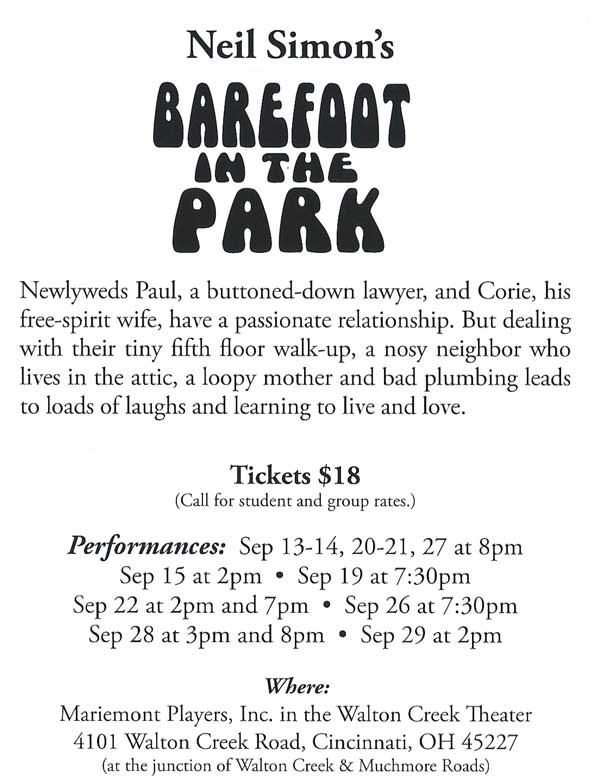