Here are the facts as Ohio River Way understands them from City, SORTA(Southern Ohio Regional Transit Authority) and TID documents:

As usual,  ODOT is short on details in this Eastern Corridor Update. This update was received through e-mail.

May 27, 2014 – Beginning this month, the proposed State Route (SR) 32 Relocation project, which is one component of the multi-modal Eastern Corridor Program, is entering into a collaborative process that is expected to continue through the summer and fall and conclude by the end of the year. Information gained through this process will help determine the options available for moving forward with the proposed project.

The SR 32 Relocation project is one of the most complicated projects under consideration in the country as it is located in a region that requires coordination with multiple federal and state agencies which have varying and sometimes differing interests. These agencies include the U.S. Fish and Wildlife Service; National Park Service; U.S. Environmental Protection Agency, U.S. Army Corp or Engineers; the Federal Highway Administration; the Ohio Department of Natural Resources, Scenic Rivers; Ohio Historic Preservation Office; and others.

To help coordinate among these agencies, the Ohio Department of Transportation (ODOT) has engaged the U.S. Institute for Environmental Conflict Resolution and its contracted independent organization, the Consensus Building Institute (CBI), to assess the interests of the agencies in relation to the proposed project and determine how best to work through potential conflicts.

To support their work, CBI will be reviewing project documentation, completed studies and recommendations including the Eastern Corridor Major Investment Study, the2002 Land Use Vision Plan, the 2005 Green Infrastructure Concept Master Plan, the 2004 Tier 1 Environmental Impact Statement and the 2006 Tier 1 Record of Decision. They will also meet with local and regional governmental agencies, as well as consider input from local communities, business organizations, and other stakeholders.

ODOT is integrating this work into their project development process for the SR 32 Relocation project. At this time, potential corridors within which possible roadway alignments could be located have been recommended, but specific routes have not yet been identified. This process will result in identification of both challenges and opportunities within the corridors to address the transportation needs of the region.

As one of the primary thoroughfares within the Eastern Corridor region, SR 32 is an important element of the Eastern Corridor Program. Currently, this road experiences high volumes of commuter, heavy truck and residential traffic. This creates high levels of congestion and accident rates and poor levels of overall service, inhibiting economic development and access to the growing number of jobs. In addition, travel is primarily limited to car and truck-based traffic. The proposed SR 32 Relocation project is intended to address these issues and provide direct, multi-modal access to US 50, the Red Bank corridor and I-71 using a boulevard-style, four-lane road. For more information, visit www.EasternCorridor.org.
###

The Eastern Corridor is a program of integrated, multi-modal transportation investments that, together, will provide essential east-west connectivity for the Greater Cincinnati region. Currently in its second phase of study, the Program will address critical congestion issues and mobility challenges expected to worsen by 2030. Planned enhancements will improve travel and connections between central Cincinnati and the communities extending east through Hamilton County into western Clermont County. Program elements include improvements to existing road networks, new and expanded roadways, rail transit, expanded bus routes and improvements for pedestrians and bicyclists.

Mariemont One of America’s 11 Most Endangered Historic Places®

The National Trust for Historic Preservation named the Village of Mariemont to its 2013 list of America’s 11 Most Endangered Historic Places. This annual list spotlights important examples of the nation’s architectural, cultural and natural heritage that are at risk of destruction or irreparable damage. More than 240 sites have been on the list over its 26-year history, and in that time, only a handful of listed sites have been lost.

One of America’s most picturesque communities, the Village of Mariemont is a National Historic Landmark designed between 1921 and 1925 by renowned landscape architect and community planner John Nolen. Considered one of America’s most important examples of town planning, it was named a “Top 10 Great Neighborhood in America” by the American Planning Association in 2008, and its elegant layout continues to inspire planners and designers to this day.

Now, the Ohio Department of Transportation is proposing a major transportation project that would significantly impact the Village, including a possible elevated highway through its southern border. In addition to disrupting Mariemont’s design, the proposed highway would also impact other natural and cultural resources, including the nationally designated Wild and Scenic Little Miami River valley, Native American archaeological sites, and a freshwater aquifer. Rather than choosing this destructive proposal, ODOT should pursue alternatives—including selecting a route that avoids Mariemont, improving existing roads, and revisiting whether a new highway is actually needed in this location.

“As a National Historic Landmark and one of the nation’s preeminent examples of town planning, the Village of Mariemont is a uniquely idyllic American community,” said Stephanie Meeks, president of the National Trust for Historic Preservation. “The proposal to build an elevated highway through the southern part of the Village would permanently scar this place and forever alter the careful designs that have made it an inspiration for generations of planners.”

Members of the public are invited to learn more about what they can do to support these 11 historic places and hundreds of other endangered sites at www.PreservationNation.org/places

Wasson Way: A project that is shovel ready!

It is time to proceed with the Wasson Way Project that will produce a 6.5 mile Bike and Pedestrian Path from Xavier University to the Little Miami Bike Trail in Newtown!

An interconnecting network of bike and hiking paths has health and recreational benefits and the Wasson Way Project that runs through Mariemont is an affordable natural pathway to connect hundreds of miles of trails. Recently, I walked the length of the abandoned railroad tracks that skirts the North side of the ‘South 80’ and would extend behind Mariemont Krogers.  Aside from settling the issues of railroad ownership of the right-of-way and modest financing, I see no downside to proceeding and it is hard for me to believe that this small ‘piece’ of the Eastern Corridor can influence the ultimate development of the Red Bank Road extender to Route 32 or the light rail for public transportation proposed by Todd Portune. 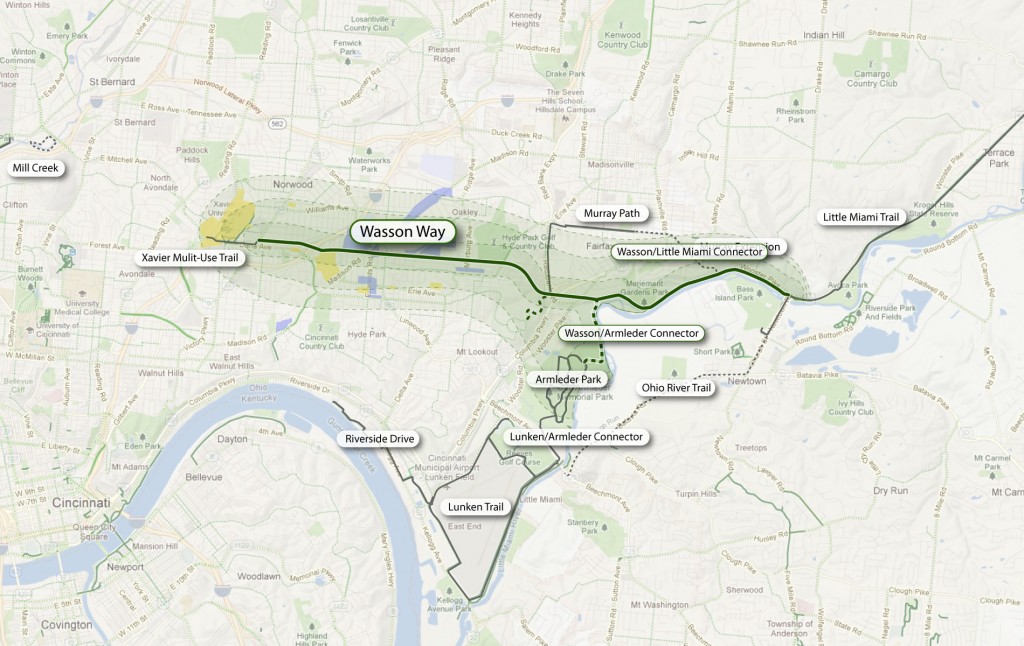 We need an open discussion and further feedback from those involved in the decision making process.